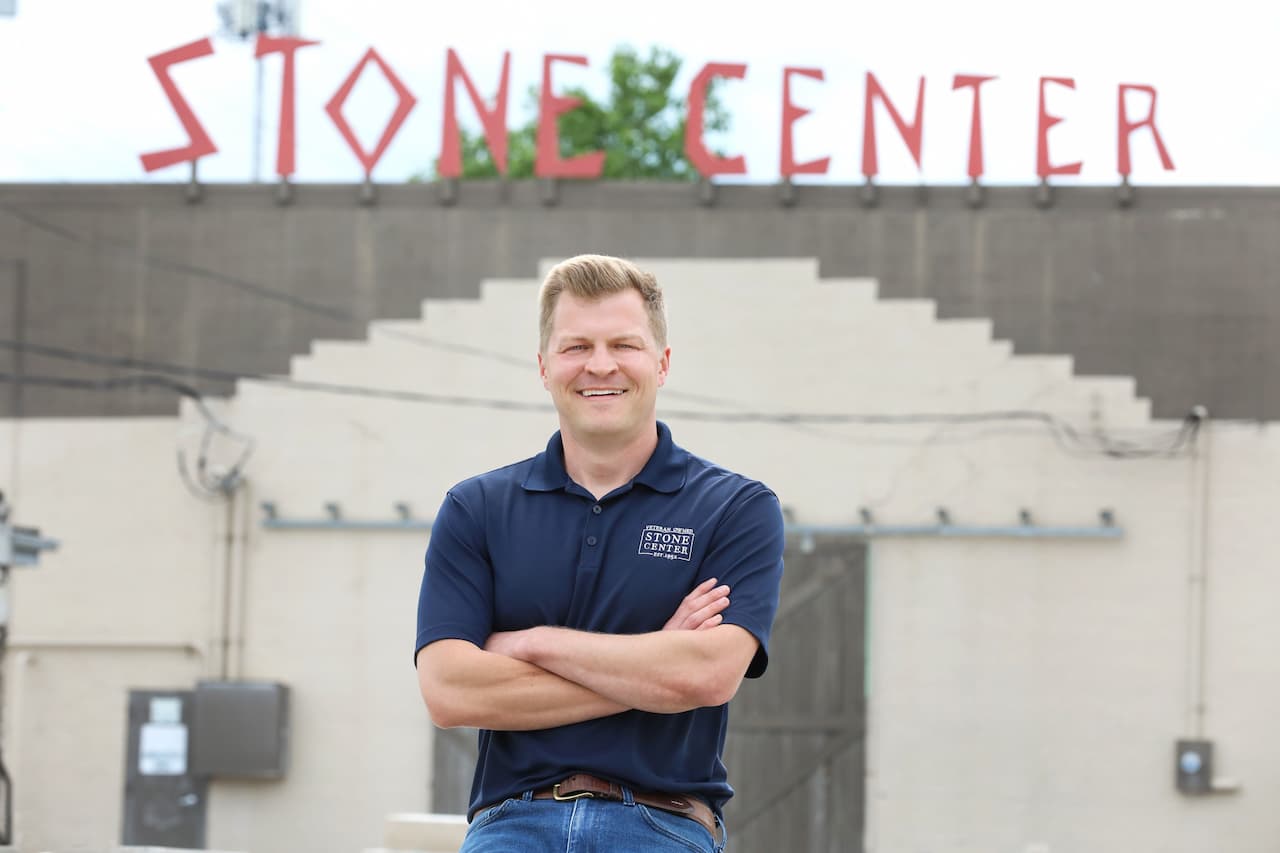 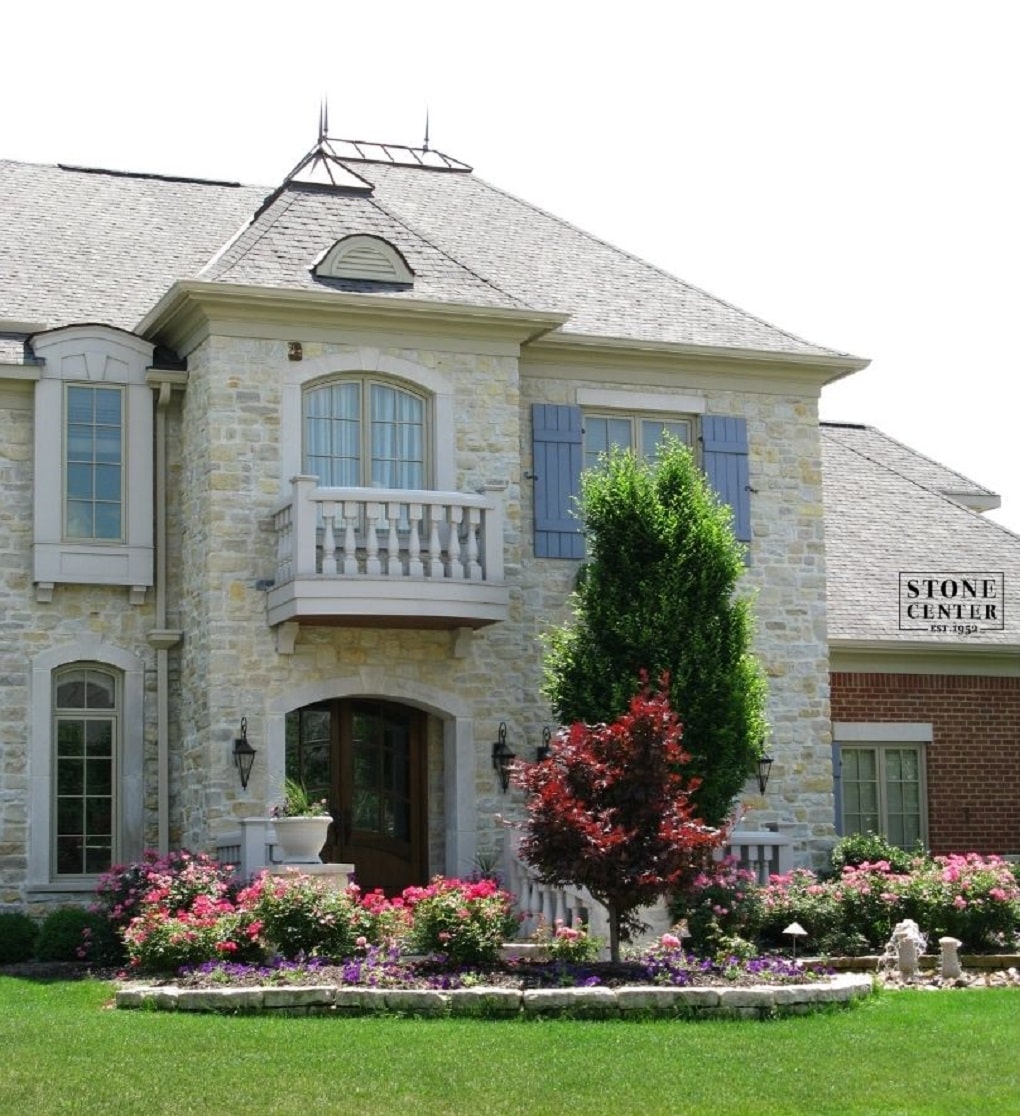 Natural, highly durable, and used by ancient civilizations in building and construction to great aplomb; limestone and marble are undoubtedly functional, aesthetically pleasing, and still widely utilized today. Yet, despite possessing qualities that marginally overlap, they’re not absolutely equal and have different applications.

Homeowners of Columbus and Cincinnati use both these enduring natural stones throughout their homes. Each exhibits unique characteristics, offering a distinct aesthetic to indoor and outdoor spaces. Let’s go through limestone and marble similarities and differences, so you know where and how to best employ these stones in your beautiful home.

Limestone is a sedimentary rock composed largely of calcium carbonate, formed millions of years ago by the accumulation of shells and skeletons of marine animals on the ocean floor. Ocean-dwelling organisms like clams, muscles, and choral use calcium carbonate found in seawater to create their exoskeletons and bones.

As these organisms die, their shells and bones are broken down by the waves and settle on the ocean floor, where the water’s pressure compacts them into the sediment, thus creating limestone. Limestone is found in canyons and cliffs where large bodies of water have receded.

The area around the Great Lakes, such as Michigan, Indiana, and Illinois, has considerable deposits. Limestone is also quarried from the Mediterranean Basin in France, Spain, Italy, Israel, and Egypt. It is recognized by the presence of fossils and makes up about 10% of the total volume of all sedimentary rocks.

When limestone is exposed to high temperatures, its crystals interlock and metamorphose into marble. During metamorphosis, clay, sand, and chert impurities sometimes produce distinct veins and swirls within the stone, giving it a distinct and sought-after veining, synonymous with luxury and wealth.

Italy, China, India, and Spain are the top four marble exporting countries, although it also quarries in Turkey, Greece, and the United States. Generally, marble is composed of one or more of the following minerals: calcite, dolomite, or serpentine. Once quarried in large blocks, it's cut into slabs, which are then polished and distributed to stone suppliers.

Marble is available in various colors due to the minerals present during formation. It's widely utilized as a building material in monuments, sculptures, and of course, kitchen countertops and vanities. The purest calcite marble is white, while varieties with limonite are yellow and so on.

Marble is considered a prestigious material in architecture and interior design. It’s used principally for statuary, tabletops, novelties, columns, flooring, fountains, and fireplace surrounds. From ancient civilizations to modern home countertops and vanities, marble is decadently beautiful, adding luxury to any space it's part of.

From the Taj Mahal to the Pyramid of Giza, the use of limestone in architecture boasts some impressive feats. Today, limestone is widely used in commercial and residential construction. In homes, you’ll find limestone fireplace surrounds, exterior facades, flooring, pavers, and more. It’s also a popular landscaping stone due to its permeability and porosity.

Marble vs Limestone: Which One Is More Durable?

So, is marble stronger than limestone? Make no mistake, both marble and limestone are durable. However, since limestone is young marble, it is a bit softer and more porous because there are small openings between fossil fragments. The metamorphoses process makes marble harder than limestone; however, this doesn’t suggest easier damage to the former.

These two stones have a close rating on the Mohs scale of mineral hardness, where the higher the number, the harder the stone.  Limestone is usually a 3, while marble falls between a 3 and 4. Before comparing durability, it is worthwhile considering the application of the natural stone. For instance, limestone pavers are likely a more economical option than marble, but marble countertops may be a superior interior design choice over limestone.

It is important to note with interior applications that marble and limestone are highly vulnerable to acid. Spilled lemonade or vinegar can leave permanent etch marks on both, which require professional resurfacing and re-honing.

Limestone to Marble: The Visual Differences

There is a visual difference between limestone and marble; however, this depends on the variety of stones, as some may have a similar look. Limestone comes in natural colors like gray, tan, or brown, and frequently harbors impressions left by fossils and fuels. Varieties rich in organic matter may almost be black, while traces of iron or manganese can give it an off-white to yellow or red color.

Marble is usually light-colored when it is formed with very few impurities. If there are clay minerals, iron oxides, or bituminous material, it may turn out bluish, gray, pink, yellow, or black. For example, Thassos marble is the whitest and purest in the world, while Bahai Blue is an exotic and expensive type. Overall, marble does offer a greater variety ranging from white to pink, brown, and even black.

How Marble and Limestone Differ in Costs?

Limestone is undoubtedly the more affordable of the two. Marble is one of the most expensive decorative and architectural stones on the market, costing anywhere from $40—$200 per square foot, whereas limestone costs between $45-$90. Of course, this depends on the type of marble and the application of the stone.

Marble varies more drastically in cost depending on the pattern and veining, the location of quarry, demand, availability, slab choice, and thickness. Limestone is likely more readily available. For instance, certain marble has to be imported, whereas the United States already has massive quarries in Indiana.

Do the Stones Require Sealing?

One of limestone and marbles similarities is that both these natural stones need sealing. This increases their durability and makes them easier to maintain. Sealing also maintains its natural appearance and prevents stains. Most homeowners think staining comes from spills, however, water and dirt can “crystallize” within a stone’s pores and create unsightly marks, as well as bacteria breeding grounds.

Sealing frequency depends on the amount of traffic the stone experiences. Some installers suggest re-sealing every 18 months, while others do so every four to five years. If limestone or marble begins to appear dull or “matte” after a regular clear, then it likely needs to be resealed. Re-sealing, etch removal, and refinishing are an integral parts of the stone restoration.

Even though limestone and marble are different, either can be a wonderful upgrade to your space. However, if you are looking for natural stone for an outside project, we’d recommend limestone because it is cost-effective and slightly more suitable for exterior applications.

At Stone Center, we offer a sizable selection of Indiana limestone pavers, coping, sills, and fireplace surrounds cut to your specifications. As an esteemed natural stone supplier, we supply limestone for a wide range of residential and commercial projects across the Midwest. Should you need advice on anything natural stone-related, we’re always happy to help. Call us at 614-412-1752 or get a free quote! 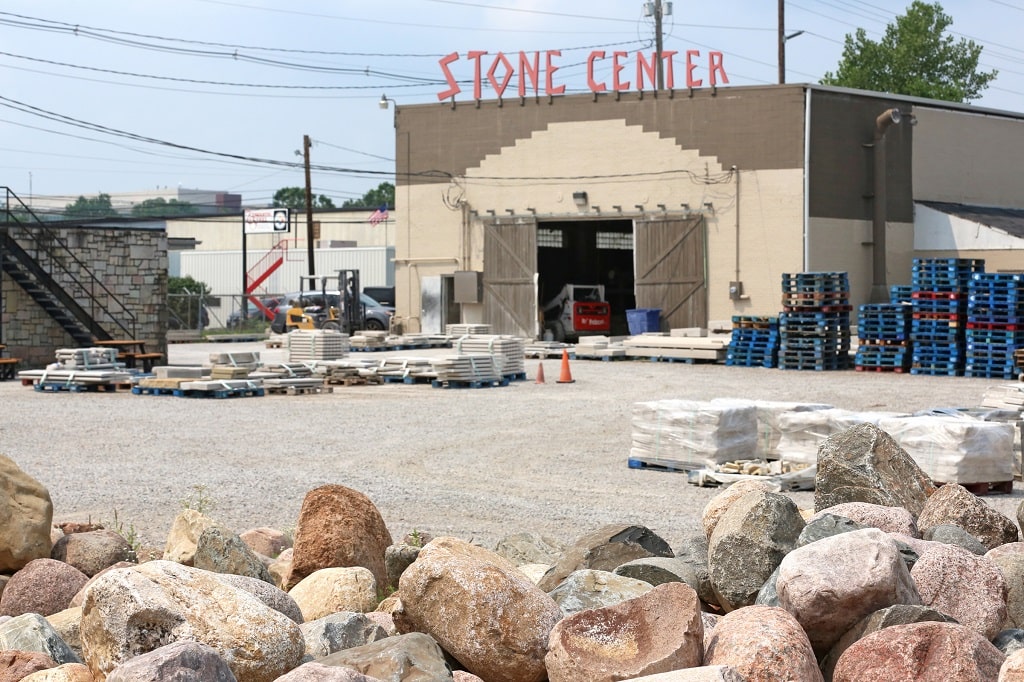 Limestone vs. Granite: What Is the Difference?

Granite and limestone are hard, durable, and resistant to cracks and weather, and they are utilized in different buildings. Let's compare two natural stones products! 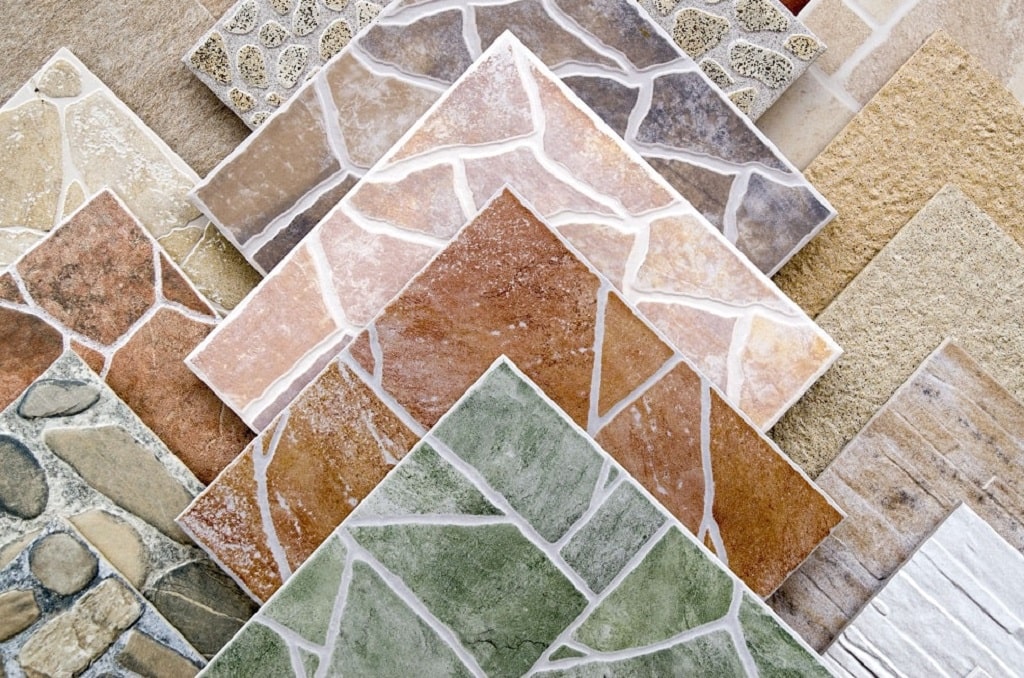 We'll examine some porcelain tiles pros and cons. This will inform your decision-making and ensure you're choosing the right option for your unique situation. 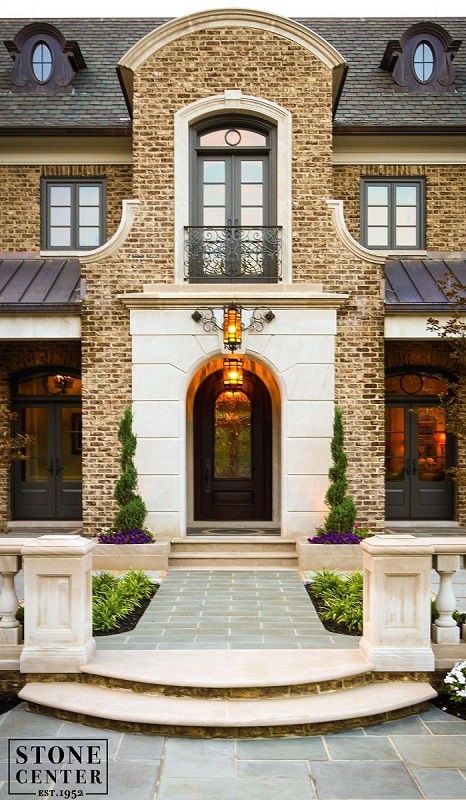 Adding stone to the house exterior it’s possible to give your home a mini-makeover without committing to massive change. It is a way of increasing home value. 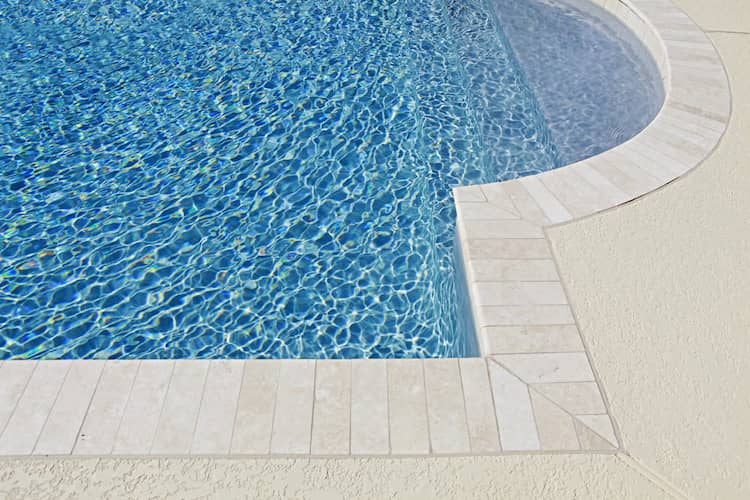 Let’s examine the benefits of natural stone, delving into exactly where and how it outshines some of its competitors.